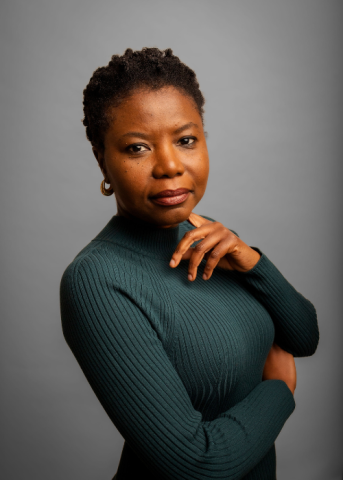 Peace Adzo Medie is an award-winning scholar and Ghanaian writer. Her debut novel, His Only Wife, is a witty and moving glimpse into family and marriage in modern-day Ghana. In it, she explores social pressures felt by women and writes deftly about relationships, class, gender, and wealth. His Only Wife was a New York Times Book Review Editors’ Choice, a New York Times Notable Book of the Year, and a Time Magazine Must-Read Book of 2020. It was selected for the Reese’s Book Club and named a best book of 2020 by The Observer, BuzzFeed, Library Journal, and the Chicago Public Library. Her short stories have appeared in Transition, Slice, Four Way Review, and elsewhere, and her second novel, Nightbloom, will be published in 2023 by Algonquin Books.

Medie is Associate Professor in Politics at the University of Bristol in England. She studies state and non-state actors’ responses to gender-based violence and other forms of insecurity. Her book, Global Norms and Local Action: The Campaigns to End Violence Against Women in Africa, was a finalist for the Conflict Research Society Book of the Year Prize. Her research has been funded by organizations such as the Andrew W. Mellon Foundation, the Harry Frank Guggenheim Foundation, and the Social Science Research Council, and she has held several fellowships, including the Oxford-Princeton Global Leaders Fellowship. Medie has won many awards for her research, including the 2019 Best Article Award of the European Journal of Politics and Gender. She was a co-editor of African Affairs, the top-ranked African studies journal, and co-edits the Oxford Studies in African Politics and International Relations book series.

Medie speaks internationally, delivering keynotes and serving on panels at universities as well as the United Nations and the African Union on topics including politics, violence against women, women’s movements, and feminism. She holds a Ph.D. in International Affairs from the University of Pittsburgh and a BA in Geography from the University of Ghana. She was born in Liberia.

The Promise of Feminism—What is Possible?

Writing Women’s Lives: The Power of the Ordinary

On Becoming a Writer

The Place of Fiction in the Social Sciences

Peace Adzo Medie – The Republic: ‘Writing a Novel Is Fun.’

Peace Adzo Medie's speaking engagements are handled by the Hachette Speakers Bureau, a division of Hachette Book Group and an accredited member of the International Association of Speakers Bureaus. Contact us to learn more.