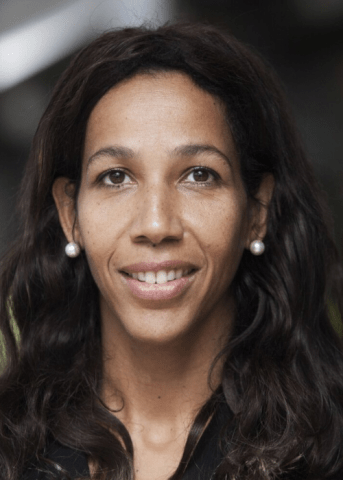 My Grandfather Would Have Shot Me, an international bestseller, is a book born of a shocking discovery: At age 38, married with two children, Jennifer Teege picked up a book by chance at Hamburg’s main library and discovered that her grandfather was the brutal Nazi commandant of the Plaszow concentration camp, portrayed so memorably by Ralph Fiennes in the film Schindler’s List.

Teege’s mother was German; her father was Nigerian. Unable to raise a newborn child, her single mother placed Teege in a children’s home when Teege was four weeks old. In her early childhood, Teege had only intermittent contact with her mother and grandmother; that ended when Teege, age 7, was adopted by a white German family, where she was raised in a loving home. Later, in her twenties, Teege struggled with depression. She went to college in Israel, where she learned fluent Hebrew and earned degrees in Middle Eastern and African studies. She returned to Germany where she began a career in advertising and started a family of her own.

Already coping with the trauma of rejection by her birth mother, Teege now faced other cruel facts: that she had to learn about her biological family’s secret from a book; and that a monstrous man, Amon Goeth, reviled for decades as “the butcher of Plaszow,” was her biological grandfather. Was it possible she might resemble him? She fell into a deep depression, unable to function as a mother. After many months of therapy, Teege was eventually able to live fully in the present once again. She set off to visit the sites of her grandfather’s crimes, to seek a greater understanding of her biological family and, if possible, some sense of closure in relation to his victims. She made contact with her biological mother and father and finally shared her story with her Israeli friends. The result is her memoir, My Grandfather Would Have Shot Me, written with award-winning journalist Nikola Sellmair, who also supplies historical and other context in a separate, interwoven narrative.

After her emotional pilgrimage, Teege says, “I’m no longer a prisoner of the past. I know now that I am not to blame, and the guilt no longer weighs heavily on my shoulders. There is no Nazi gene: We can decide for ourselves who and what we want to be.”

My Grandfather Would Have Shot Me, has been an international bestseller, published in Germany, Poland, France, Japan, Brazil, Israel, the UK, Australia, and the United States. Fluent in five languages, Jennifer Teege has spoken at organizations, universities, libraries, and book festivals all over the world, including over 50 events in the U.S.

My Grandfather Would Have Shot Me: A Black Woman Discovers Her Family’s Nazi Past

The Toxic Power of Family Secrets: How Does the Past Shape Our Future and How Can We Reconcile It?

Resilience: Refusing to Give Up

Writing Your Own Life Story

Jennifer Teege – Aish.Com: My Nazi Grandfather Would Have Shot Me

Jennifer Teege's speaking engagements are handled by the Hachette Speakers Bureau, a division of Hachette Book Group and an accredited member of the International Association of Speakers Bureaus. Contact us to learn more.