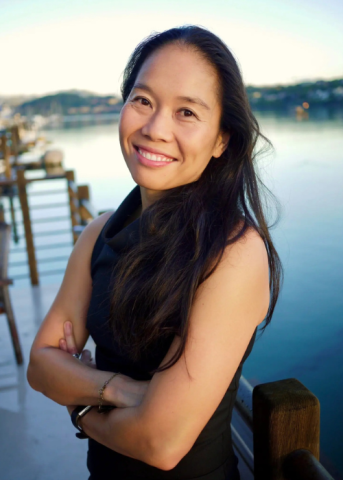 Bonnie Tsui’s parents met in a swimming pool in Hong Kong. She grew up a competitive swimmer in Long Island, New York, and went on to attend Harvard University, where she rowed crew on the Charles River, moved across the ocean to Australia, and then returned to the US, where she now lives, surfs, and swims in the Bay Area.

It only made sense that Bonnie’s deep relationship with water would meet her passion for writing. She is a longtime contributor to The New York Times, and her book Why We Swim became a bestseller and was named a New York Times Book Review Editors' Choice, a TIME Magazine Must-Read Book of 2020, an NPR Best Book of the Year, and A Best Book of the Season by The San Francisco Chronicle, Outside, Oprah, BuzzFeed, Bustle, and more.

Why We Swim is a celebration of water and the role it has played throughout history and across the globe. The book encompasses stories of Olympic champions, a Baghdad swim club that meets in Saddam Hussein’s former palace pool, modern-day Japanese samurai swimmers, and even an Icelandic fisherman who improbably survives a wintry six-hour swim after a shipwreck. Bonnie is an immersive writer whose research took her to the South China Sea, involved swimming without a wetsuit in the San Francisco Bay, and included interviewing record breakers and survivors. She delves into the science of swimming as well as humans’ spiritual connection to water.

Bonnie has performed numerous times at Pop-Up Magazine and other live storytelling events. She is also the author of American Chinatown, a San Francisco Chronicle bestseller that won the 2010 Asian/Pacific American Award for Literature. Her first children’s book, Sarah & the Big Wave, is about the first woman to surf Mavericks.

Why We Swim: Exploring Our Curious Human Relationship with Water

Finding Flow: How Water Can Buoy Our Bodies and Our Minds

Equally Buoyant: The Enduring Racial Legacy of Swimming in America

A Follower of River Veins: Why Writing What You Love Is the Best Writing

Bonnie Tsui – NPR: ‘Why We Swim’ Looks For Answers In People And Places Across The Globe

Bonnie Tsui' speaking engagements are handled by the Hachette Speakers Bureau, a division of Hachette Book Group and an accredited member of the International Association of Speakers Bureaus. Contact us to learn more.